I am on a road trip across America, interviewing sustainable business leaders for a new book I am working on. Entering Iowa from the Northwest corner, hundreds of wind turbines rise majestically from the endless corn and soybean fields that are a staple of the Iowa landscape. 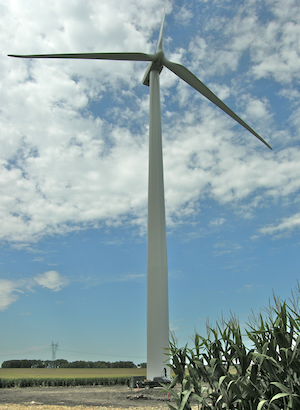 Pulling into an access road, I drive up to a newly installed wind turbine that looks like it is ready to be commissioned. It is a GE 1.6 megawatt (MW) wind turbine. The GE on-site engineer has obvious pride as he describes the wind turbine specs, design, and geology of the area that makes this site so amenable to wind power generation.

This wind turbine is located on the Coteau des Prairies, sometimes referred to as Buffalo Ridge. The ridge is composed of thick glacial deposits that gently rise to about 900 feet, from the surrounding prairie flatlands.  The ridge runs eastward, from eastern South Dakota, through southwestern Minnesota, and northwestern Iowa. Numerous wind farms have been built along the ridge to take advantage of the high average wind speeds.

Iowa wind power accounts for about 20% of the electricity generated in the state – about 4 billion watts of power (4 GW). Iowa leads the US in percentage of electrical power generated by wind. Wind turbines will produce from 12 to 16 times more revenue per acre than corn or soybeans. And farmers can plant crops around the wind turbine, reaping the benefits of both. In addition, in the winter, winds are stronger, generating much needed revenue while the fields lay fallow.

Coincidentally, I saw this news today, about farmers in the UK ramping up their investment in renewable energy:

More than one third of UK farmers want to install renewable energy projects on their farmland, most of them within the next year, and hope to generate average returns of 25,000 pounds ($40,565) per year, UK bank Barclays said.

“We want to signal very clearly to the market that we consider this to be a big future industry, a big opportunity for agricultural businesses and also a big opportunity for the renewables,” said Barclays Business’ Product and Marketing Director, Travers Clarke-Walker, whose team will be managing the fund.

“This is a quickly emerging industry.”

A Barclays survey of 300 agricultural customers also showed four out of five farmers recognize renewable energy can save costs and 60 percent see it as a source of additional income.

The use of renewable energy on farmland has been brought to public attention in Britain by Michael Eavis, farmer and founder of the Glastonbury music festival, who installed over one thousand solar panels on his land.

The cost of installing renewable energy projects can be recovered after around 10 years, Clarke-Walker said.

The UK government slashed state support for large-scale solar plants earlier this month as it was concerned a few huge commercial projects would scoop up money intended for household and community projects.

Nevertheless, Clarke-Walker expects around 80-90 percent of projects will be solar and wind farms as they are cheapest to build and their costs are forecast to drop by up to 50 percent in the next three to five years as demand rises and technology improves.

Britain aims to generate 15 percent of energy from renewable sources by 2020, compared with 7.4 percent reached in 2010.

The fund’s loan budget is unlimited and the first 100 million pounds could support well over 100 projects as the average cost varies between 250,000-700,000 pounds, Clarke-Walker said.

Suffolk-based farmer Mike Porter, who plants crops such as wheat and oil seed rape, received a 130,000 pound loan from Barclays to install solar panels on a grain store last month and is expected to make 20,000 pounds per year by exporting power to the national grid.

0 thoughts on “Wind Power In Iowa: The New Super Crop”