Landing at Puerto Vallarta International Airport in Mexico’s western state of Jalisco felt risky and appropriate: it was October 11th, the same day that hurricane Jova was expected to make landfall. The threatening category 3 storm was just off the coast as I was beginning my research assistant position on “Indigenous food security adaptation and climate change”.

I had accepted the six-month assignment with the Center for World Indigenous Studies as part of my graduate work in sustainable development. The ominous clouds looming ahead seemed symbolic—of what, exactly, I did not quite know. While hurricane Jova ended up sparing the community from severe structural damage, it wreaked havoc on a series of towns south along the coast.

Mexico has suffered increasingly intense drought, four major hurricanes, and devastating floods which have led to soil degradation and destroyed crops, infrastructure, and human settlements. Indigenous communities, and the bio-culturally diverse regions they represent, are vulnerable to the recognizably changing climate. I have begun to learn that rural communities in western Mexico have the capacity and desire to adapt to the changes using knowledge learned from earlier generations of farmers and residents. This knowledge is a key point of debate in Durban, South Africa where climate change treaty negotiations started on November 28th. Given what I have experienced on the ground in western Mexico, it is critical for those in the midst of the United Nations Forum on Climate Change (UNFCC) and other “leading experts” to look at how ready and willing THEY are to adapt to inevitable climatic changes and related food insecurities.

Part of my work focuses on the local use and production of climate sensitive plants while engaging in long distance colloquies over the incorporation of language in the climate change treaty negotiations supportive of indigenous peoples. The question of how ready and willing self-described “developed” nations are to adapt to climate change is not intended as a direct plea for their higher levels of social and environmental accountability (although I do believe such governments and the corporations who fund them should be held accountable). Rather, it stems from a long overdue acknowledgement that the 5,000+ indigenous communities worldwide, who hold 80% of the world’s remaining biodiversity within their lands, have proven to be incredibly resourceful in adapting to historical climatic changes in their respective eco-niches through a consistent and symbiotic relationship with Mother Earth. Instead of spending time not agreeing to global mitigation plans, government decision-makers representing the monetarily prosperous sectors of nations should be asking for guidance from indigenous communities as they consider their own layers of vulnerability: concrete food deserts, oil-dependent infrastructures, and an incessant need to consume well beyond human and environmental means. As the climatic shi(f)t hits the fan, will they have not only the hands-on skills to make adaptive responses but also the collective ability to creatively and more responsibly reconfigure their societies?

In a recent visit with members of the indigenous municipality of Cabo Corrientes, Jalisco, I met a subsistence farmer named Bety. 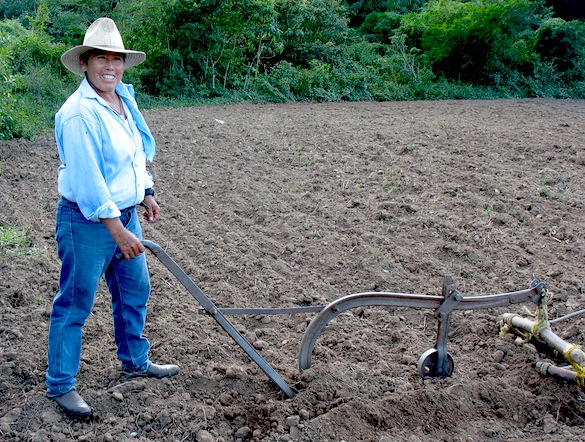 Dr. Rudolph Ryser, the leader of this research effort sent me to Bety’s community to ask about the food availability and distribution patterns of certain nutritionally-dense foods. What I had read about the security of such communities and what I found were two different things. In current economic and agricultural discourse subsistence societies are primarily described as those who do not produce a surplus; they produce only the minimal amount of food or goods that are necessary for their basic survival. Based on this definition, one might envision—as is often depicted on the front cover of UN and NGO briefing reports—families on the brink of starvation, eager to acquire the technological and financial transfers necessary to upgrade their production capacity.

This was not the scenario I encountered as I talked with Bety and observed what actually transacted on her farm. Set amongst a backdrop of lush hillsides, Bety and her parents, Crispina and Ricardo have been subsistence farming for generations. Maize, heirloom tomatoes and squash, maguey, hibisucs, sugar cane, beans, plantains, avocados, chickens, pigs and cows are just a handful of food sources that Bety proudly showed me as we toured their small, incredibly-efficient parcel of land. Subsistence clearly produced considerable abundance and variety. “Why would I want to work in a factory or an office all day when I can work out here; move my body and breathe fresh air?” she asked. “The land wants to provide–if you are willing to put in the time and love–she is more than willing to produce”.

Nearing sunset, Bety and her family literally kicked up their heels, relaxed in hammocks, and invited us to partake in home-fermented raicilla—a regional, moonshine version of Tequila. It was apparent that subsistence communities celebrate happy hour as well.

While I recognize that the degree to which different subsistence communities around the world can or cannot fully provide for their own needs varies tremendously, especially given uneven climate change effects, I think it is important to highlight a positive, yet often-neglected view of subsistence living. In her seminal work entitled Subsistence Perspective, Maria Mies presents a vision for an alternative ecological model for societies. It is not an economic model; rather, it is a way of looking at the economy—a perspective. She describes it as subsistence perspective because it focuses on the creation, recreation and support of life and it has no other purpose than this. It is life that stands at the centre of this vision, rather than money, economic growth or profit. For more on this topic, see Ecofeminism and the subsistence perspective: fostering cooperation, not competition.

Prior to my visit with Bety, I might have read Maria Mies revised definition of subsistence, and quietly tucked it away as a cozy, past-oriented notion that is no longer plausible within today’s fast-paced, growth-oriented ideology. Yet when I make my daily trek to the neighborhood Mercado, an open-air market teeming with color, variety, and intricate layers of human interaction, I recognize the numerous ways in which Mexico continues to boast tremendous life-supporting cultural infrastructure.

Indigenous communities, which comprise most of Mexico’s population, have cultivated these life-supporting systems for millennia. Their role in local, regional and international discussions on climate change and food security is vital, not only because of the vulnerabilities their own communities face, but because of the critical knowledge–the science— they have developed as a result of successful historical adaptations.