Most cities in the U.S. have operated on the assumption that growth is inherently beneficial and that more and faster growth will benefit local residents economically. Local growth is often cited as the cure for urban ailments, especially the need for local jobs. But does the empirical evidence show that growth is actually providing these benefits?

To test claims about the benefits of local growth, I examined the relationship between growth and prosperity in US metro areas. This study looked at the 100 largest US metro areas (representing 66% of the total US population) using the latest federal data for the 2000-09 period. The average annual population growth rate of each metro area was compared with unemployment rate, per capita income, and poverty rate using graphical and statistical analysis. 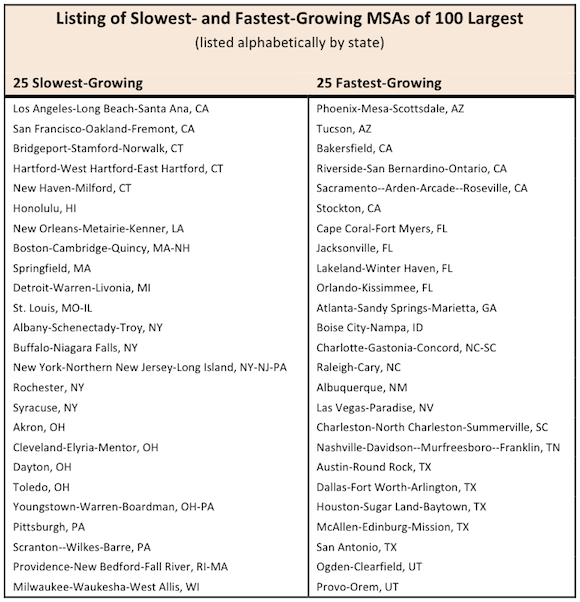 The “conventional wisdom” that growth generates economic and employment benefits was not supported by these data. The study found that those metro areas that have fared the best had the lowest growth rates. Even metro areas with stable or declining populations tended to fare better than fast-growing areas in terms of basic measures of economic well-being.

Some of the remarkable findings:

Another remarkable finding is that stable metro areas (those with little or no growth) did relatively well. Statistically-speaking, residents of an area with no growth over the 9-year period tended to have 43% more income gain than an area growing at 3%/year. Undoubtedly this offers a ray of hope that stable, sustainable communities may be perfectly viable — even prosperous — within our current economic system.

While certain businesses prosper from growth, apparently the balance of the community does not. The statistics showing that fast-growing areas tend to have lower and declining incomes, indicate that any gains by the businesses that directly benefit from growth are more than offset by losses to the rest of the local population. In other words, a small segment of the local population may benefit from faster growth, but the larger population tends to see their prosperity decline.

This study was not an attempt to explain all the complex relationships that exist, but merely to test whether there is a correlation between growth and some of the benefits that are so often attributed to it. More research is clearly needed on this important topic.

Population growth tends to be directly linked to urban growth. There is a close, linear relationship between the two, as more people require more housing units and more commercial buildings for employment and shopping.

Public policies and plans regarding urban growth typically involve tradeoffs between economic, environmental, and social impacts. Local residents may view a policy to encourage land development or growth as negatively impacting their quality of life through increased traffic congestion, environmental quality impacts, loss of farm and forest lands, and loss of amenity values (such as tranquility, sense of community, and open space). They may also be concerned about higher taxes to fund the cost of the new public infrastructure (roads, schools, sewer and water systems, etc.) required to serve growth. However, the prospect that new growth will bring jobs and economic prosperity that may benefit local residents is often viewed as compelling enough to outweigh these costs.

So if growth is actually not providing these benefits, then the decision-making balance shifts towards the fiscal, environmental, and quality-of-life impacts. With greater awareness of the relationship between growth and prosperity, perhaps we will see a shift in our focus toward making our cities better places, not just bigger places.

Most US cities have been actively pursuing growth with all the policy and financial tools at their disposal under the presumption that they are fostering local prosperity. As US cities seek a path out of the recession, this study suggests that new economic development strategies will be needed that do not rely so heavily on growth. ###

To read the full study, see: Relationship between Growth and Prosperity in 100 Largest U.S. Metropolitan Areas by Eben Fodor

Eben Fodor is the Principal of Fodor & Associates, a consulting firm based in Eugene, Oregon specializing in studying the fiscal, economic, and environmental impacts of urban growth and land development. This independent research was funded by Fodor & Associates as a public service.