Jeffrey Sachs has a outstanding new book out called The Price of Civilization. The title of the book refers to remarks made by US Supreme Court justice Oliver Wendell Holmes, who spoke of the need for citizens of a country, who enjoyed the benefits of living in that country, to pay the price to support that civilization.

Sachs provides a thoughtful, cogent analysis of challenges facing America, and how to address those challenges. The book has a clean straightforward jargon-free narrative that is balanced and has elements that will appeal to conservatives, independents and progressives alike – though each group will find things to disagree with, there is much that will be embraced.

Sachs looks at the nature of America, through the lens of democracy, fairness, civic virtue, compassion, and happiness, and asks the question “What is our role in the 21st century?”

Sachs is the Director of The Earth Institute, Quetelet Professor of Sustainable Development, and Professor of Health Policy and Management at Columbia University.

Here’s Sachs being interviewed by Charlie Rose, about The Price of Civilization.

Here’s Sachs in the middle of the Occupy Wall Street demonstrations, taking questions from reporters. Sachs is articulate, plain speaking and clearly frustrated with the faltering state of the nation and the cozy monied relationship between government and big business.

On a related note, Charles M. Blow had an excellent graphic from the Bertelsmann Stiftung foundation report “Social Justice in the OECD — How Do the Member States Compare?” It helps give some context to issues driving the Occupy Wall Street demonstrations and challenges facing America.

Common Wealth: Economics for a Crowded Planet by Jeffrey Sachs

When Does the Wealth of a Nation Hurt its Wellbeing? by Jay Kimball

What feeds a revolution? by Jay Kimball

Some good jobs news: “Solar is the fastest-growing industry in the US” according to Rhone Resch, President of  The Solar Energy Industries Association (SEIA), during his remarks accompanying release of the quarterly report “US Solar Market Insight.”  The report was jointly prepared and released by SEIA and Greentech Media (GTM).

The graphic at right summarizes the stunning growth of the solar industry. Here are highlights from the report:

Rhone Resch said that the solar industry employs 100,000 Americans and that that number could double in the next two years. Within a few years, the US will be the world’s largest solar market, according to SEIA.

While California, New Jersey, and Arizona remained the top three states for solar installations, Pennsylvania jumped to the number 4 position, from number 8 in the rank last year. Maryland made the biggest move from 16th to 8th in the ranks.

Solar electric installations surpassed one gigawatt for the first time, and the US shows signs of being one of the top, if not the top global market for solar in the coming years. New solar photovoltaic (PV) installations for Q1 2011 grew 66% over Q1 2010. Total growth of the US solar market was up 67% in 2010, over 2009.

In Q1 2011 for the solar industry, jobs were up, installations were way up for PV and Concentrated Solar Power (CSP), manufacturing growth was up and prices are coming down. Solar system pricing is down 15 percent from Q1 2010.

While fossil fuels continue getting more and more expensive and extraction of oil, gas and coal becomes more and more toxic, the much cleaner renewable energy sector, including the solar industry, pricing is getting cheaper and cheaper.

The extraordinary growth of solar makes sense. Think of sunlight as free oil. It’s all around us every day, available for collection. No need for drilling and no threat of oil spills or toxic emissions. Solar panels convert the free energy into electricity or heat. And they do it with remarkable efficiency. It takes energy to produce energy, and to my mind, one of the most important ways to measure the energy performance of something is by calculating the Energy Returned on Energy Invested (ERoEI) – which measures how much energy it takes to produce the energy. The higher the ERoEI, the better. Here’s a chart showing the ERoEI for various energy sources. 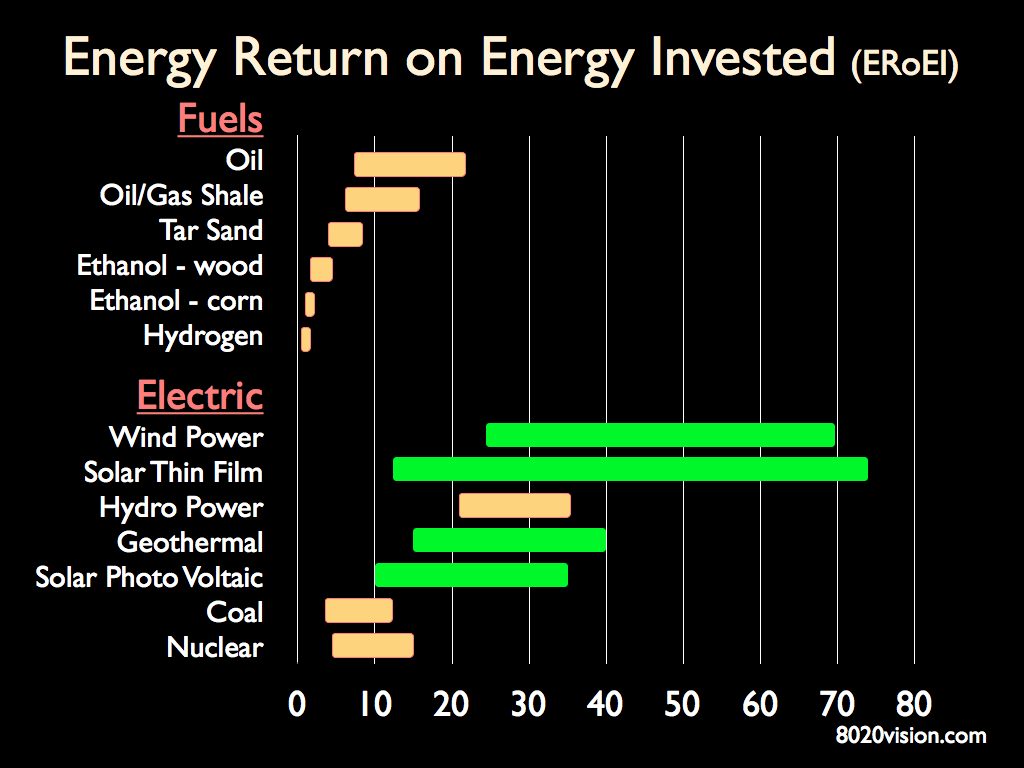 Solar and wind have the highest ERoEI of all sources of energy, and they are trending higher. Meanwhile, looking at oil, the easy oil has been extracted, what remains is increasingly expensive and difficult to get to, and toxic to extract and process. It takes much more energy to produce a barrel of oil today than it did just 50 years ago. Oil’s ERoEI has plummeted from about 100:1 in the 1950’s to about 10:1 today.

In the US Energy Information Administration’s most recent Monthly Energy Review, they show that domestic production of renewable energy has surpassed that of nuclear power.

Looking at just the electricity sector, according to the latest issue of EIA’s Electric Power Monthly, for the first quarter of 2011, renewable energy sources (biomass, geothermal, solar, water, wind) accounted for 12.94 percent of net U.S. electrical generation — up from 10.31 percent during the same period in 2010.

The chart below is a concise view of the energy flow from various energy sources and destinations. Though it is only current through 2009, it gives a remarkable view into the complex landscape of where our energy comes from and how we use it.

Details on the reports

The Q2 2011 edition of US Solar Market Insight will be available in September 2011.

Details on the solar energy companies operating in each state, plus examples of the jobs being created