Charles M. Blow, one of my favorite “number crunchers”, and op-ed columnist at the NY Times, has a good article today on what causes a revolution. He turns the lens on Egypt and Tunisia, as well as other countries that might be poised for revolution, and looks at what factors can contribute to people rising up and overthrowing their government.

Though agitating factors like unemployment and age have featured in many articles on the situation in Egypt and Tunisia, Charles M. Blow digs deeper. He prepared the table below, which shows median age, unemployment rate, income inequality, food as a percentage household spending, level of democracy, regime type, and internet penetration.

Worth noting: The real US unemployment rate is about 16%, when considering the more comprehensive U6 Rate. The US has the highest income inequality of all the countries considered in the list above. The US ranks with Rwanda and Uganda.  For more on that, see the recent 8020 Vision article When Does the Wealth of a Nation Hurt its Wellbeing?

I am glad Blow listed food as one of the metrics to consider. There is a proverb that governments ignore at their peril:

Though Egypt is not unique – corrupt repressive governance and cronyism can be found at the heart of many dysfunctional nations – once corruption interferes with meeting the basic needs of the populace, revolution is imminent.

The Basics Of Revolution

When I work with clients and this subject comes up, I like to turn to Maslow’s hierarchy of needs to put this in perspective. As we can see, two of Charles Blow’s metrics – food and unemployment – are fundamental components of basic human needs.

The lower down on Maslow’s pyramid a dysfunctional regime effects the populace, the deeper the impact, and the more likely the effected people will rebel. In other words, when a government fails to meet the basic human needs of its people, the people rise up. 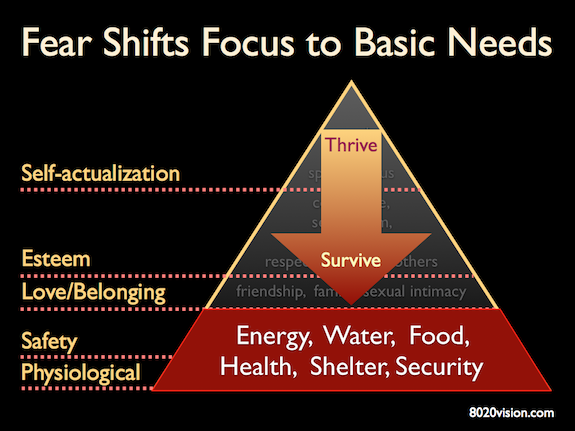 Looking back in history for examples of how food and government are connected at the hip, our eyes come to rest on the Roman empire. Though the causes of the fall of Rome are debated still, one thing is certain: As the Roman empire devolved into the late-stage “Bread and Circuses” phase, once the farm system failed and the bread ran out, the rulers quickly lost the support of the people. The party was over.

The party is over in Egypt. President Mubarak now requires plainclothes thugs with clubs to beat back the public, losing what little credibility and dignity he might have had. How will he sleep? I don’t think the prideful Mubarak’s $60 billion family bank account will numb the shame he must feel as he watches the Egyptian army protect the people from his secret police.

As Tunisia and Egypt fail, Charles M. Blow scans his table of cold hard data and asks “Who’s next?”

A Global Perspective on Food

Pulling the lens back for a more global view – as world population expands inexorably – we are approaching a tipping point with regard to food production.

This week, a report that gained little attention in the news, but has major ramifications for every nation – especially those where food is a larger percentage of household income – was published by the UN’s Food and Agriculture Organization (FAO).

The FAO report – The World Food Situation – reports that world food prices surged to a new historic peak in January, for the seventh consecutive month. The FAO Food Price Index (below) is a commodity basket that regularly tracks monthly changes in global food prices.

This is the highest level (both in real and nominal terms) since FAO started measuring food prices in 1990.

As we can see from the chart on the right, the price of individual commodities that comprise the index – meat, dairy, cereals, oil and fats, and sugar – are all on the rise.

Global food prices have exceeded their pre-recession price levels. Some of this is due to the price of petroleum returning to pre-recession levels. About 17% of all petroleum production is consumed for food production. Petroleum is a key ingredient in the manufacture of fertilizer and pesticides, and sources energy for irrigation, food transport, etc. Note how the Food Price Index closely parallels the price of oil.

In addition, climate change is driving an increase in extreme weather, including record heat during growing seasons, record flooding, and extreme rain.

And as nations move up the affluence curve, their consumption of food increases, creating rising demand from a limited supply. As Julian Cribb, author of The Coming Famine: The Global Food Crisis and What We Can Do to Avoid It, astutely points out – as developing nations become more affluent, they consume more protein, in the form of fish, meat, milk, eggs, etc. For an example from China, read the article that appeared in The Financial Times today: Chinese Corn Imports Forecast to Soar. Note the mention of corn for meat production.

Protein is usually produced with grain, and it is an inefficient process:

As our population increases, and as each nation seeks affluence, food will become a major factor in the stability of all nations, not just the rotting authoritarian regimes of the world. 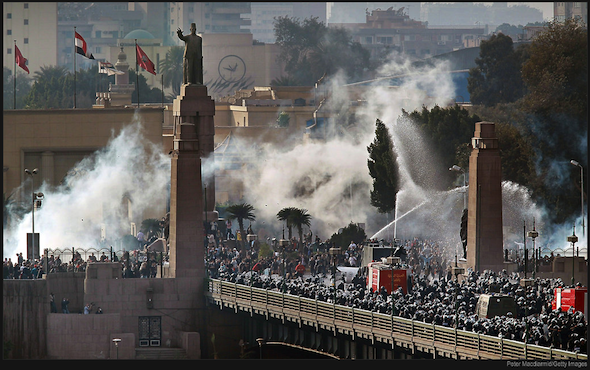 Why Farmers Need a Pay Rise…

0 thoughts on “What feeds a revolution?”