The Bonneville Power Administration (BPA) is recruiting one hundred homeowners in Washington for an experiment on how to store surplus wind energy. The BPA is testing a promising smart-grid concept that would use residential water heaters to help manage the fluctuations of wind energy generation.

The project will address two problems experienced on the grid: shortage of power during peak times and surges of power during windy periods, when the energy isn’t needed.

The BPA, working with Mason County Public Utility District Number 3, will install special devices on water heaters that will communicate with the electrical grid and tell the water heaters to turn on or off, based on grid conditions and the amount of renewable energy that’s available. 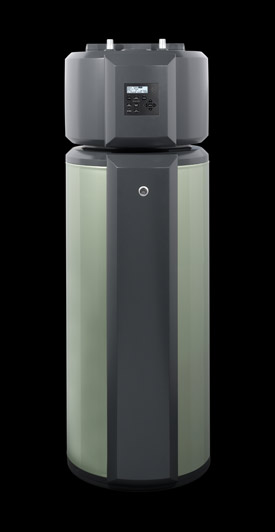 While homeowners will be able to override the control device at any time, it’s unlikely that they would even notice a change in temperature.

The water heaters in effect become energy storage devices — turning on to absorb excess power and shutting down when demand ramps up —leveling out the peaks and valleys of energy use. Benefits include:

Wind power is the fastest growing source of renewable energy, accounting for about 3 percent of US electric generation. About 53 million homes in the United States, or 42 percent of the total, use electric hot water heaters. Added up, they account for 13 percent to 17 percent of nationwide residential electricity use.

In the Pacific Northwest, home of the BPA, it’s estimated that there are 4.3 million water heaters that can store 2,600 megawatt-hours by allowing the storage temperature to vary by five degrees. (NB: For a detailed analysis see the Northwest Power and Conservation Council report prepared by Ken Corum.)

The Northwest Energy Coalition does a nice job detailing the background, and benefits of this approach to storing excess wind energy. Highlights of their article, Using simple smart water heaters to integrate intermittent renewables, are below.

Wind-generated power is clean, relatively cheap and available in large quantities. But the wind itself is quite unpredictable, so much so that for each average megawatt (aMW) of wind power we need, we must erect about 3 megawatts of turbine capacity, since actual output could be anywhere from 0 to 3 megawatts at any instant.

Suppose our region, which consumes about 21,000 average MW of electricity each year, wants to get a third of its power from wind.  We’d have to build about 21,000 megawatts (MW) of turbine capacity to get 7,000 average MW of electricity.  Given weather variability and the geographical spacing of wind projects, over time the actual production of those 21,000 megawatts of turbines will vary from about 1,000 MW to 15,000 MW due to weather fronts and daily warming patterns. Problematic 3,000- to 4,000-megawatt swings can occur in as little as 10-30 minutes.

To deal with large variations in wind, grid operators use some expensive tools now at their disposal, generally limited to ramping natural gas-fired combustion turbines and/or hydro generation up and down. Ramping up is fairly easy; today’s grid has ample reserve capacity on which to draw.

Ramping down is another matter. When wind generation suddenly spikes during periods of low demand (at night or during mild weather hours), the system can have less flexible generation on-line (nuclear and coal plants) that cannot be cut back to make room for the wind. The region’s inflexible “baseload” coal plants and one nuclear plant, which together provide more than a quarter of our electricity, cannot be economically ramped up and down in response to wind variability.

Previous Transformers and NW Energy Coalition’s Bright Future report have addressed wind-integration issues, noting – in particular – that the problems will lessen as we progressively eliminate coal-fueled power from the Northwest grid, as renewable projects grow and become more diverse and geographical dispersed, and as “smart grid” deployment provides a new back-up resource.

Smart grid to the rescue

In a Feb. 10, 2009, presentation to the Northwest Power and Conservation Council, Council staff member Ken Corum provided a powerful example of how one relatively simple smart grid innovation – using electric water heaters as temporary storage devices — could help the grid integrate large amounts of wind power at very low cost. We expand on Corum’s example below.

The Northwest power system serves about 4.3 million electric water heaters. If all were running at once, their loads would total more than 19,000 MW. Of course, they don’t all run at the same time.  Actual demand might be just a few hundred megawatts in the middle of the night, surging to more than 5,000 MW around 8 a.m. when people take their showers. Use drops during the day, and then peaks again at about 3,500 MW around 8 p.m. as people come home and wash dishes, clothes, etc.

Most people won’t even notice the small temperature changes. But spread over millions of water heaters, those few degrees of difference are enough to avoid ramping fossil-fuel and hydro generation up and down, thus improving system-wide fuel efficiency and leaving more water in the river for migrating salmon.

Once the infrastructure — smart meters that can communicate with both the utility and home appliances — is in place, manufacturers could start installing computer chips, adding perhaps $5-10 to the cost of a water heater, Given the system savings the water heater controls would generate, utilities could afford to cover the additional cost, and/or offer customers a rate discount or other incentive in exchange for limited control of their water heaters.

Water heaters are a great choice for smart grid applications because of their relatively short life spans. Over about 12 years, the current stock could be totally replaced with smart water heaters.

Shifting peaks – and keeping the lights on

Aside from facilitating the integration of thousands of megawatts of wind power, controllable water heaters (and other appliances and equipment that draw electricity 24/7) provide two other benefits:

1. Reliability. Major power lines and generating plants occasionally suffer sudden outages due to fires, ice, wind or equipment failure.  Turning down a few million water heaters could quickly shave demand enough to cover the power loss and avoid a major blackout.  In fact, the chips discussed above can be made to automatically and instantaneously detect frequency changes in the electricity they use without any operator intervention. The chip reacts to a sudden change from the standard 60 cycles per second by instantly turning the heater on or off to keep the grid stable.

2. Money. Utilities spend a lot of money following the daily peaks and valleys of human activity.  Thirty to 40% of their generation capacity sits idle for much of each 24-hour day.  Another 5-10% come on only during very extreme weather — the hottest or coldest days.  But utilities must cover the capital and maintenance costs of all these resources, no matter how little used.

Controllable water heaters would rarely go on during system peaks and could help utilities respond to system emergencies … at huge cost savings. Utilities would be able to spread demand more evenly throughout the day, increasing power line and substation efficiency and avoiding the costs of some mostly idle generation resources. These actions could lower bills substantially and/or provide savings to fund additional smart grid investment.

And that’s just one example

Though this article has focused on electric water heaters, similar controls can be installed in freezers, air conditioners and electric furnaces.  Electric and hybrid-electric vehicles are other examples. Their charging rates can be altered while the vehicles are plugged into the grid. The opportunities are only starting to reveal themselves.

Allowing grid operators access to our appliance controls raises issues of cybersecurity, privacy and the potential for short-circuiting due process (e.g., automatic shutoff for non-payment of bills). Those issues must be adequately addressed. But the smart grid can help move the Northwest quickly and affordably to a bright energy future.