Democrats of the Congressional Committee on Energy and Commerce just released a new report detailing chemicals used in the toxic gas exploration process known as Hydraulic Fracturing (fracking or fracing). Fracking is a technique used to extract natural gas from oil shale beneath the earths surface. Communities are increasingly concerned about fracking polluting public water systems and the environment, when the chemicals leak into aquifers, rivers, streams and the atmosphere.

While the oil/gas industry has denied any problem, there is mounting evidence that public water systems and private wells are being polluted in areas around the drilling sites. In states such as Pennsylvania, politicians have welcomed Big Oil in with open arms, and thousands of gas extraction wells are expected to be drilled this year. Presently, the natural gas industry does not have to disclose the chemicals used, but scientists have identified known carcinogens and volatile organic compounds (VOCs) such as benzene, toluene, ethylbenzene and xylene. The chemicals can most often leak in to the water system in several ways:

Derrick – The natural gas process involves drilling 5,000 feet or more down and a comparable distance horizontally. The majority of the drilling liquid remains in the ground and is not biodegradable.

Well Casing – If the well casing that penetrates through the aquifer is not well sealed, chemicals can leak in to the aquifer.

Fractured Shale – To release the gas from underground, millions of gallons of water, sand and proprietary chemicals are injected, under high pressure, into the well. The pressure fractures the shale and props open fissures that enable natural gas to flow more freely out of the well. These fissures may allow the chemicals to enter the water system. In addition, recent reports suggest that radiation in the ground is contaminating the fracking fluid. This radiation has been showing up in drinking water. For more on that see the NY Times investigative article by Ian Urbina Regulation Lax as Gas Wells’ Tainted Water Hits Rivers.

Surface Contamination – The gas comes up wet in produced water and has to be separated from the wastewater on the surface. Only 30-50% of the water is typically recovered from a well. This wastewater can be highly toxic. Holding ponds, and handling mishaps can release this toxic brew into the environment.  For some examples, see the video below about residents in Pennsylvania and the impact of fracking on their water systems. Surface evaporation of VOCs coming into contact with diesel exhaust from trucks and generators at the well site, can produce ground level ozone. Ozone plumes can travel up to 250 miles.

Horizontal fracking uses up to 300 tons of a mixture of 750 chemicals, many of them proprietary, and millions of gallons of water per frack. This water then becomes contaminated and must be cleaned and disposed of.  To date, the oil/gas industry has been secretive about what chemicals are used, and has lobbied Congress for a variety of protections. Much of the contaminated water is taken to water treatment plants that are not designed to process the chemicals and radiation found in fracking fluids.

In 2005, the Bush/ Cheney Energy Bill exempted natural gas drilling from the Safe Drinking Water Act. It exempts companies from disclosing the chemicals used during hydraulic fracturing. Essentially, the provision took the Environmental Protection Agency (EPA) off the job. It is now commonly referred to as the Halliburton Loophole.

The FRAC Act (Fracturing Responsibility and Awareness of Chemical Act) is a House bill intended to repeal the Halliburton Loophole and to require the natural gas industry to disclose the chemicals they use.

The Safe Drinking Water Act was passed by Congress, in 1974, to ensure clean drinking water free from both natural and man-made contaminates.  Remember the days when rivers were so polluted with toxic industrial waste that they would ignite into flame?

Here’s the introduction from the Democrats report from the Energy and Commerce Committee – Chemicals Used In Hydraulic Fracturing (N.B. click on the link at left to see the actual report and list of chemicals):

“Hydraulic fracturing has helped to expand natural gas production in the United States, but we must ensure that these new resources don’t come at the expense of public health,” said Rep. Waxman. “This report shows that these companies are injecting millions of gallons of products that contain potentially hazardous chemicals, including known carcinogens. I urge EPA and DOE to make certain that we have strong protections in place to prevent these chemicals from entering drinking water supplies.”

“With our river ways and drinking water at stake, it’s an absolute necessity that the American public knows what is in these fracking chemicals,” said Rep. Markey. “This report is the most comprehensive look yet at the composition of the chemicals used in the fracking process, and should help the industry, the government, and the American public push for a safer way to extract natural gas.”

During the last Congress, the Committee launched an investigation into the practice of hydraulic fracturing in the United States, asking the leading oil and gas service companies to disclose information on the products used in this process between 2005 and 2009.

The Democratic Committee staff analyzed the data provided by the companies about their practices, finding that:

Once a communities water system is made toxic, property values plummet. Homeowners end up with homes that can’t be sold at anywhere near their original value. They are forced to live in their un-sellable homes and continue to be exposed to the toxic environment. Fracking can compromise public health and environmental quality.  The map below from the Gasland project shows where oil shale gas drilling areas are most intensive, in red. 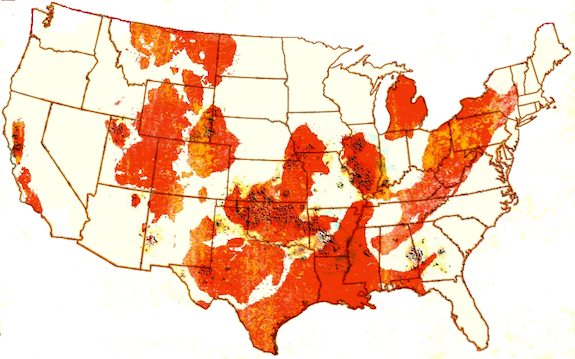 The term “play” is used in the oil and gas industry to refer to a geographic area which has been targeted for exploration due to: favorable geoseismic survey results; well logs; or production results from a new or “wildcat well” in the area. An area comes into play when it is generally recognized that there is a valuable quantity of oil or gas to be found. Oil and gas companies will send out professional “land men” who research property records at the local courthouses and after having located landowners who own the mineral rights in the play area, will offer them an oil and gas lease deal. Competition for acreage usually increases based on how hot the play is in terms of production from discovery wells in the area. The more oil and gas there is to be had, the higher the lease payments per acre are.

And money talks. Homeowners and towns can be attracted to the offer of money for exploitation of the shale. The heavy costs paid are only realized after the deal is signed – costs to the environment, increased industrial traffic through the community, attraction of outsider oil/gas workforce that can stress local community wellbeing, and of course – environmental degradation, and risk to public water systems.

Bryan Walsh, one of my favorite environmental reporters, just published this evenhanded video that looks at some specific examples of toxic fracking related events in Pennsylvania, the heart of east coast gas extraction. While business leaders in the community enjoy the increased hotel and travel related economics, the devastating impact on homeowners and communities can be tragic.

As the video shows, there is a growing conflict between public health interests and business interests. Anytime oil/gas is involved, big money is at stake. Big Oil spends tens of millions of dollars lobbying politicians to favor their business, often at the expense of public health and the environment. Local businesses welcome all the truckers, traffic and drilling personnel because it means increased commerce. But at what cost?

Communities are fighting back. Do your homework and get to know about fracking. The articles below in Recommended Reading are a good start, and rent the HBO movie documentary Gasland. You will get a good background on how communities across the US are being effected. If you think your community is being impacted by fracking, the Gasland producers have setup a good website to learn more and with tips on how to Take Action, including links to elected officials, info on local organizations, and email action alerts. Remember – oil companies are funneling big money into politicians coffers to influence public policy. It will take your steady, informed, organized community voice to counter big oil special interests.

For ideas on how to hold your elected officials accountable, read Nicholas Kristof’s really fine article on The Power of Mockery. It highlights one of the most effective ways for grass-roots movements to speak truth to power. He also features Tina Rosenberg’s new book Join the Club: How Peer Pressure Can Transform the World. Kristoff offers examples of the techniques in action, including: how kids took on Big Tobacco and reduced teen smoking in Florida; the Egyptian revolution; Serbia, etc.

I just added this excellent video by Josh Fox, calling out NY Governor Cuomo on fracking.  It is an excellent review of secret memos leaked from the gas industry, detailing how fracking system failures pollute our water resources.  Rolling Stone Magazine online has a good article calling the Governor out on fracking.

And finally, support politicians that are committed to a strong Environmental Protection Agency (EPA).

The Trend Is Our Friend

Fossil fuels are becoming more expensive and extraction more toxic. The easy stuff has already been extracted over the decades. What remains poses greater and greater risk to public health and the environment. Fossil fuels are our past. Renewable energy is our future. Renewables are becoming cheaper and cheaper and are much cleaner to produce. Let’s not compromise our future trying to ring every last drop of oil and gas out of the ground. Support politicians that understand the pressing need to rapidly transition to renewable energy and invest in research and development, education, and regulation.

I’ll leave you with this interactive diagram from the Gasland website. Click on the small circles to learn more about fracking. Click on the “To The City” arrow to scroll the image to the left to see how fracking contaminated water effects community water systems.

Chemicals Were Injected Into Wells, Report Says by Ian Urbina

Studies Say Natural Gas Has Its Own Environmental Problems by Tom Zeller Jr.

Arkansas Is Shaking: 50+ Earthquakes In Past Week; 700+ In Last Six Months at NPR

Join the Club: How Peer Pressure Can Transform the World by Tina Rosenberg