The concentration of carbon dioxide in Earth’s atmosphere may double by the end of the 21st century.

In a recent Science Magazine article, scientists at University of California, Davis discovered that increased levels of carbon dioxide in the atmosphere can reduce the protein content of crop plants by as much as 20 percent.  Their research shows that high CO2 levels interfere with the ability of plants to convert nitrates into proteins, thus reducing plant productivity and food quality. Increasing nitrogen fertilization might compensate for slower nitrate assimilation, but such fertilization rates might not be economically or environmentally feasible.

Most crop fertilizers are produced from oil. As oil supply tightens, the price of oil will rise.  The price of fertilizer will track that increase.
About 17 percent of fossil fuels are used to produce our food.  The most energy intensive activities are:

Food cost represents from 16% (developed nations) to over 60% (developing nations) of a family’s budget. As climate change reduces food quality and oil inflation drives up the cost of food production, family’s will struggle – receiving less nutritional value, at greater cost.

Looking at this news through the lens of government, three issues rise to the top:

One clever approach to producing organic nitrogen – use farm animal waste to generate biogas for energy production, and use the resultant nitrogen-rich composted manure to amend farmland soil.  The benefits? 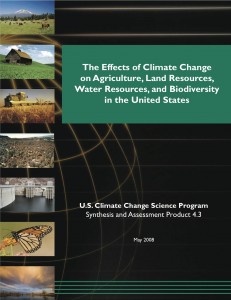 0 thoughts on “Climate Change May Reduce Protein in Crops”