Google Trends tells me that starting in 2008 the monthly number of news stories on population doubled. Most of the stories like to talk about how global population will expand by 30%, peaking at about 9.1 billion people by around 2050.  Though 2050 is a nice round number, and a convenient mid-century marker, one can be lulled in to feeling like it’s a problem that is 40 years off. Not so. The population problem is here and now. And it’s not just about the number of people on the planet, but how those people consume resources.  Let’s take a look at the pertinent trends.

The rate of population growth has a strong correlation with the effectiveness of the dominant fuel source at any given point in history.  As the chart below shows, wood was the dominant fuel until coal came on the scene in the 1600s. The population growth rate increased modestly with the proliferation of coal.  But the real exponential growth began with the discovery and exploitation of crude oil.  Crude oil production is peaking and the world is in the early stages of a transition from fossil fuels to renewable sources of energy.

As the population has grown, per capita income and consumption have grown. The most dramatic growth has been in the developing countries of China, Brazil and India. Let’s take a look at the trends in energy use and per capita income relative to some of the leading developed nations. Using GapMinder’s Trendalyzer with energy consumption data from BP’s Statistical Review of World Energy 2010 and income data from the IMF, we can see some powerful trends unfolding (N.B. data presented for 1965 through 2008, 1 year steps, circle area proportional to population size, energy use in tonnes of oil equivalent):

Less Is The New More

Though Americans represent only 5% of the world’s population, we are consuming about 24% of worlds energy. We are similarly voracious consumers of water, food, land, etc. Citizens in developing nations aspire to live the American lifestyle. Fareed Zakaria refers to this as the “rise of the rest” in his book A Post American World. But the world has only so much to give. Much of what we consume is not renewable. We are bumping up against the limits of earth’s ability to provide for us. As the population expands, for developing nations, their historically meager slice of the pie will expand. For developed nations, their slice of the pie must contract.

Using ecological footprint data from Global Footprint Network we can see the current state of consumption for North America and the rest of the world (N.B. width of bar proportional to population in associated region).

N.B. Ecological Footprint accounts estimate how many Earths were needed to meet the resource requirements of humanity for each year since 1961, when complete UN statistics became available. Resource demand (Ecological Footprint) for the world as a whole is the product of population times per capita consumption, and reflects both the level of consumption and the efficiency with which resources are turned into consumption products. Resource supply (biocapacity) varies each year with ecosystem management, agricultural practices (such as fertilizer use and irrigation), ecosystem degradation, and weather.   This global assessment shows how the size of the human enterprise compared to the biosphere, and to what extent humanity is in ecological overshoot. Overshoot is possible in the short-term because humanity can liquidate its ecological capital rather than living off annual yields.

The last sentence of the note above is important. The developed nations are already consuming beyond the earths capacity to provide. Carrying Capacity has been exceeded and as it is exceeded, Carrying Capacity declines. While developed nations are making headway improving conservation, there has been little reduction of consumption – we have simply slowed the rate of per capita consumption. Meanwhile developing nations are moving up the consumption curve, aiming for an American-class lifestyle. Depletion of earth’s precious resources accelerates – oil, potable water, wild fish, species, clean air, etc. are all in decline. Earth’s Carrying Capacity is thought to be somewhere between 1 and 3 billion people. We have been operating the planet well beyond that for almost 50 years now. 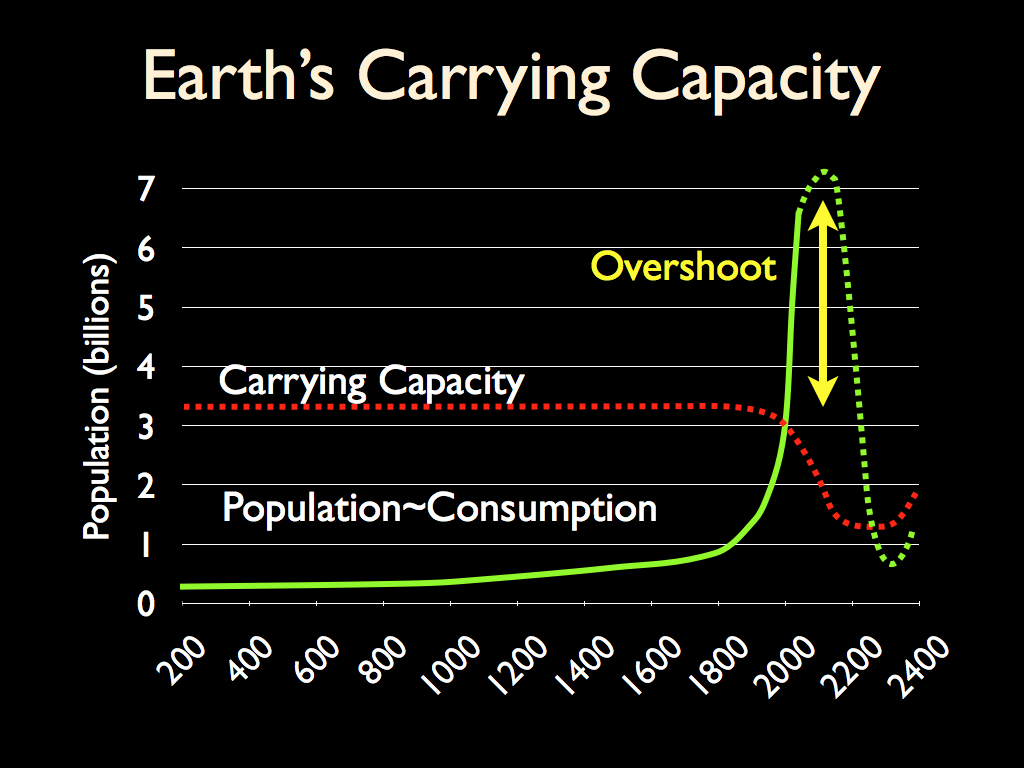 Even if the population stopped growing today, we are consuming beyond the earth’s capacity to provide. With 6.8 billion people already on the planet, the growth of consumption is the population problem, right now.

Zacharia suggests “As each country rises up, they become more self confident and nationalistic, and less inclined to cooperate in global unity toward a common goal of tackling the pressing problems of this century.”

And quoting Hamlet: “There’s the rub.”

This is not sustainable.

How do we break the vicious spiral? How can our global economy – grown soft and pudgy during the 20th century’s age of abundance – adapt and function in the lean and mean dog days of the 21st century?

0 thoughts on “The Real Population Problem”